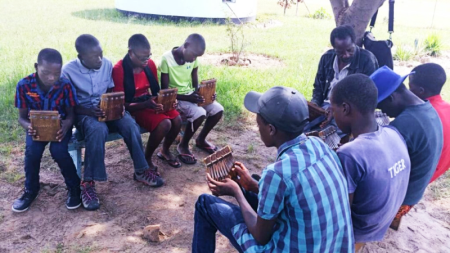 HUMWE began in September 2015 as an instrument to educate and empower children in rural Mhondoro while also helping them build their self-esteem, embrace their individual uniqueness, and their culture.

It also began as an instrument through which we could honor master mbira musician Cosmas Magaya, for the incredible role he has played in his community and in the mbira music community around the world.

Cosmas dedicated his life to the music of Zimbabwe while acting as a strong and dedicated cultural ambassador. He also made significant contributions in his community through working with various organizations to provide education, mentoring, employment, and access to health services.

Once the Cultural Arts and Education Center is built in Mhondoro, it will be named after him to honor his service to the community. Cosmas also formerly served as the Executive Director at the Center.

HUMWE is a word from the Shona people of Zimbabwe which refers to working together towards a common goal.

We envision a Zimbabwe where traditional Zimbabwean music is embraced and celebrated.

Our mission is to preserve the traditional music and culture of Zimbabwe through providing a safe place for the community to learn and share the traditions while also using the space as a sustainable platform for addressing community needs.